On 14 January, Garry Trudeau addressed the single most important social, cultural, and political issue of our time: the movement by women to raise awareness of, and fight back against, systematic sexual abuse by men in a number of fields, including politics, the entertainment industry, the news media, sports, and the tech world. In recent months, women have revealed that powerful men ranging from Donald Trump to Al Franken to Harvey Weinstein to Matt Lauer have long histories of not respecting values of consent, of using their power as a way to coerce women into sex, and of committing rape. Social media feeds are filled with posts in which a host of women, both celebrities and the people we work or went to college with,  tell us that the misdeeds and crimes of famous men reflect a larger culture in which every date, job interview, subway ride, or meeting with a professor carries the risk of an unwanted sexual comment, an inappropriate proposal, an undesired touch, or worse. Hashtags like #MeToo and #TimesUp speak to the ubiquitous nature of unwanted sexual advances and sexual assault in our communities, that women have had enough, and will, in an organized way, fight back.

In one of my first blog posts, I discussed misogyny and feminism in the early Doonesbury strips. GBT played a major role in bringing feminist ideas and values to the daily newspaper comics page, but his feminist values exist in tension with an ugly misogynist streak that ran through his early strips. Beginning with the introduction in the first year of Doonesbury’s existence of Second-Wave feminist characters like Nichole and Joanie Caucus, women who challenged traditional ideas about women, work, and family, through more recent strips that addressed sexual assault in the military, Trudeau has a long history of using his voice to amplify feminist messages. However, in many of his early strips, Trudeau’s work reflected the anti-woman attitudes that were intrinsic to much of the underground comix aesthetic and culture that he brought to the daily papers. While the limitations of the mainstream funny pages meant that he couldn’t push boundaries in the same way as his alternative press contemporaries, the attitudes about women expressed by characters like Mike and B.D. in the earliest strips were deeply informed by the misogyny prevalent in the many of the underground strips (…and, of course, the mainstream comics). Women existed primarily as potential sexual conquests, those who didn’t put out or meet particular beauty standards were portrayed in a derogatory way, and feminists were likened to insane ideologues.

The 14 January strip was not the first time that GBT addressed the #MeToo moment. On 3 December, he published a strip that lampooned the cluelessness of men who were gradually coming to the realization that the game was up and they would no longer be able to get away with their usual behaviour towards women. While former President Trff Bmzklfrpz of Berzerkistan notes that in his country, “sexual harassment is considered a huge compliment,” Duke laments the fact that he can no longer ogle his female employees. This strip uses satire to make a valuable point: the problem is men and how their beliefs about women and sex allow them to justify abhorrent conduct. 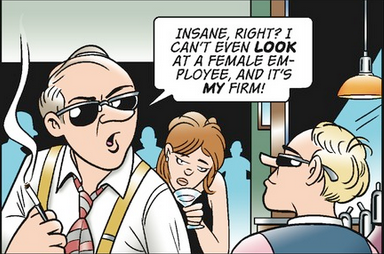 This week’s strip, however, while addressing the same issues, falls short of the mark. It’s a mailbag strip, in which Mike and Mark respond to an enquiry about sexual harassment in the Doonesbury universe. Letters about sexual misconduct have been “pouring in,” and I was hopeful that Mike’s unease at reading them signaled that Trudeau was going to address an ugly skeleton in the Doonesbury closet, specifically Mike’s (and other characters’) early-days attitudes and conduct towards women.

Instead, GBT took the easy way out. Instead of addressing strips in which women were to be “recycled” after they ceased to entertain men, where early versions of our era’s “pick-up artists” are able to disarm women with a glance in some sort of adolescent fantasy, and where undesirable women were drawn as animals, Trudeau ran with an old joke about Mike being a hopeless nebbish. Trudeau could have turned the lens back on his own work and owned up to the fact that, in the earliest days of the strip, he didn’t live up to the feminist values that define the overwhelming majority of his work. Instead, he played to the idea that Mike Doonesbury is an unremarkable loser, “harmless and inoffensive, doing the best he can.” The letter – from the strip’s female characters – means that Mike is “in the clear.”

Mike gets to breathe a big sigh of relief, one that, I’d wager, in this moment, many men hope to be able to share. In the wake of the current discourse about men, women, and sex, men should be thinking hard about their past behaviour, and, at the very least, pledging to move forward with a renewed commitment to values of respect for women as human beings. Doonesbury, like so much of the culture that surrounds us, is not totally “in the clear” when it comes to how it dealt with relationships between men and women. Trudeau had a great chance to address a relatively small number of missteps in an otherwise remarkable history of writing about women and their struggles. I wish he’d taken it.

One thought on “This Week in Doonesbury: A Missed Opportunity.”